Autism – Brief Report On The Effects of Exercise 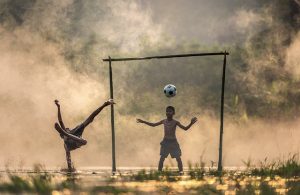 In 1997, Mitchell and Rosenthal-Malek published a report in the Journal of Autism Development Disorder (27[2], 192-201) about the effects of exercise on the self-stimulatory behaviors and positive responding of adolescents with autism.

According to their report, there have been earlier research performed that showed that exercise has had some success in diminishing negative behaviors in populations that have special needs. Based on this research, Mitchell and Rosenthal-Malek chose to continue this study on a small sample of children (5 adolescent males around the age of 15) that have autism.

The study had each child complete either an exercise program or an academic program during the school day for 20 days (10 of each type of program). The exercise program included stretching and jogging for 20 minutes while the academic program consisted of the standard curriculum that is provided during a school day. It’s also important to note that the child was in a regular classroom and also in a community workshop switching their environment throughout the test. The data that they collected included the amount of:

According to Mitchell and Rosenthal-Malek, the data suggest that in both the classroom and the community workshop, the amount of self-stimulatory behaviors decreased significantly after exercise as opposed to when they were in the academic setting. Other noteworthy results the exercise increased the number of correct answers in the classroom and the overall work produced in the community workshop.

Based on the results of this study, it is highly recommended that there should be an inclusion of exercise programs for adolescent students as part of their mandatory curriculum. However, this is one of many tests on a small sample size. Further testing is required to prove that this would be beneficial for all cases of autism or anyone with sensory processing disorder.

This article was posted in Research Abstracts. Bookmark the permalink. Follow comments with the RSS feed for this post. Both comments and trackbacks are closed.